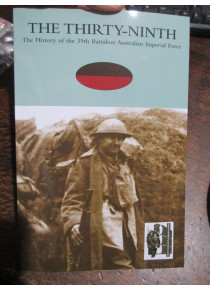 THIRTY-NINTH The History of the 39th Battalion Australian Imperial Force'
compiled by Lieut. Col A T Paterson DSO MC..( above shown the 39th Battalion's colour patch dark brown over red ). Paterson's Book Dedication says, "Dedicated to the everlasting Memory of Fallen Comrades of the 39th Battalion who by sacrificing their lives in the cause of their Country have consecrated Forever the Traditions made by their Battalion". So was the high esteem held by members and family of the 39th Battalion fallen. All current family relations of the 39th Battalion members can feel justifiably proud of their forebears and the sacrifice they made for Australia. Many members of the 39th Battalion come from Ballarat and surrounds. Ballarat is well known for its citizens valorous deeds during World War One.  The glorious Avenue of Honour and recent addition of the Pompey Elliott Statue ensure Ballarat will not forget their fallen.
We are indeed fortunate that Paterson wrote this wonderful military history book as a legacy for all to read the 39th Battalion’s contribution to the AIF during WW1

Lieut. Col A T Paterson was appointed to the 39th Battalion with the rank of Captain. By 1917, he received further promotion to Major and later in 1918 to Lieutenant Colonel. He commanded the 39th Battalion at the Defence of Amiens. For his services to the Battalion and Australia he was awarded both the DSO and MC medals. He died in 1950.

This is the Official Battalion History book compiled and written with the assistance of the 39th Battalion Association, Battalion members, and written documents/diary/information.
The book was first published in 1934.

This book is a professionally produced reprint of that history. It is a true reproduction of the 1934 1st edition. Even these reprints escalate in value when they in turn, become
out of print. Here is your chance to obtain this book that can be treasured
as a hand me down Family History Book. Follows the 39th Battalion 1st AIF history
from its formation at Ballarat Showgrounds in early 1916 through to the Armistice.
The text is fluent and full personal battalion members stories, the book being based upon edited transcripts of interviews which had been conducted after the war with former officers and with many other members. The results reliable and authoritative in every way. The
39th fought as an element of 10th Inf Bde, 3rd Aust Div. and its Battle Honours
speak for themselves -Messines, Ypres, Broodseinde , Passchendaele, Somme, Amiens,
Mont St Quentin, Hindenburg Line, and St Quentin Canal.
A Roll of Honour, Honours and Awards (inc. Recommendations), and full member unit nominal roll complete this exceptional large military history.
At Wars end the Battalion Casualties 405 killed, 1637 wounded (including gassed).