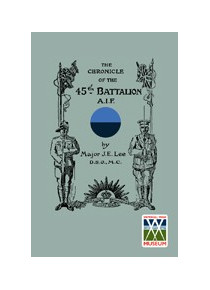 This is the Battalion that best selling book SOMME MUD author Edward Lynch,
was a member. The 45th Battalion was raised in Egypt on 2 March 1916 as part of the “doubling” of the AIF. Approximately half of its new recruits were Gallipoli veterans from the 13th Battalion (including the author Major Lee), and the other half, fresh reinforcements from Australia.
Reflecting the composition of the 13th, the new 45th Battalion was composed mostly
of men from New South Wales.

It fought in its first major battle at Pozières in August 1916, defending ground previously captured by the 2nd Australian Division. After Pozières the 45th Battalion spent the period until March 1917 alternating between duty in the trenches and training and rest behind the lines, first around Ypres in Belgium, and then in the Somme Valley in France. The 45th Battalion was in reserve for the 4th Division’s first major action of 1917 – the first battle of Bullecourt – and was not committed to the attack. It was, however, heavily engaged during the battle of Messines in June, and suffered commensurate casualties.
The focus of the AIF’s operations had now switched to the Ypres sector in Belgium
and the 45th took part in another major battle near Passchendaele on October
12. Conditions were horrendous and the operation was hastily planned – thus
it resulted in failure. In the spring of 1918 it played a crucial role in turning
the last great German offensive of the war when it defeated attacks aimed at
breaking through the British front around Dernancourt.

The Allies launched their own offensive on 8 August with the battle of Amiens. On the first day of this battle the 45th Battalion captured 400 German prisoners, 30 artillery pieces and 18 machine guns. 8 August became known as the “black day of the German Army” and initiated a retreat back to the formidable defensive barrier known as the Hindenburg Line. The 45th Battalion fought its last major action of the war on 18 September 1918 around Le Verguier to seize the “outpost line” that guarded the approaches to the main defences. The battalion was out of the line when the war ended on 11 November, and was disbanded on 2 May 1919.

The book was first published in 1925. This book being offered is a professionally produced reprint of that history. It is a true reproduction of the 1925 1st edition. Of course the value of an original copy of this history is close to 500 dollars. Even these reprints escalate in value when they also become out of print. Here is your chance to obtain this book that can be treasured as a hand me down Family History Book.