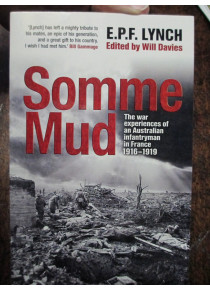 Somme Mud: The War Experiences of an Australian Infantryman in France 1916-1919 By E.P.F. Lynch﻿


This Digger Diary book is close to a  history of the 45th Battalion AIF.

Somme Mud: The War Experiences of an Australian Infantryman in France 1916-1919 By E.P.F. Lynch, edited by Will Davies.

Eighteen-year-old private Edward Lynch, fresh from Sydney and heading for his first taste of war with reinforcements for Twelfth Brigade AIF, wrote: "We march through absolutely unbelievable conditions. On either side stretches a quagmire, a solid sea of slimy mud."

"We live in a world of mud," Lynch wrote. "We sleep in it, work in it, fight in it, wade in it and many of us die in it. We see it, feel it, eat it and curse it, but we can't escape it, not even by dying." He was right. By the end of the Somme battle, more than 70,000 Allied soldiers had been pulverised into the mud, their bodies shredded into unidentifiable nothingness by shells and machineguns.﻿

Roads through this horror were primitive, generally made of wooden planks and distinguished only where shattered cars, ambulances, ammunition limbers, dead horses and mules had been shoved aside to let men pass. Deep shell holes filled with stinking water and corpses, whole and in pieces, pitted the entire landscape.

Off the boards, every step had to be wrenched free and few men could move far without rest. Stretcher bearers had to be relieved every 40m or so. Sentries in the maze of waterlogged trenches sank up to their knees and had to struggle furiously to get out and find another place to sink into.

Wounded five times, Lynch came home to write his story in exercise books. The manuscript remained with his family until now, when it emerges like a time capsule, curious in yesteryear phrases and oddly forgotten language, sometimes surprising in humour, offering a rare personal insight into friendship among the ordeals of war. It is a remarkably valuable addition to Australia's military history.

Among 252 men in Lynch's original detachment, only 19 were left with his battalion at war's end, all of them wounded more than once, yet none appears to have held a lasting hatred toward the enemy and most insist they enlisted only because their mates did. Lynch agrees. Afterwards he wrote: "The brightest memory of the lot is that I have known real men. Men with the cover off ... Men who were mates and mates who were men."

Please note this Somme Mud book is supplied by publisher in either of the front covers pictured otherwise there is no difference.