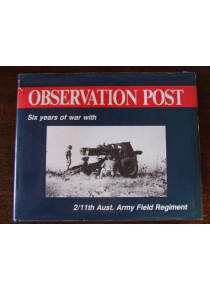 Bill Lewis, the compiler, was an Officer with the Regiment.
A detailed History of the 2/11th Field Regiment﻿ Artillery Unit, supported by large named photograph prints of each Battery Troop. A Roll of Honour and full member Nominal Roll complete this WW2 Military History Book.

The 2/11th Field Regiment was raised on 1 July 1940 at a  temporary headquarters in Richmond, Victoria. Initial volunteers for the regiment came from depots at Geelong, Caulfield, Balcombe, and Royal Park, and were concentrated at the military camp at Seymour.

The regiment was formed as part of the 8th Division and in September moved to Bonegilla, where it joined other units of the division. While at Bonegilla, the regiment received its first allocation of guns - 18-pounders from the First World War. In April the 2/11th Field Regiment embarked for overseas service.

Having travelled by troopship, the regiment arrived at Suez, Egypt, in May and went on by train to the camp at Hill 95, Palestine.

In June the Allies - British, Australian, Indian, and the Free French - invaded Syria and encountered heavier-than-expected resistance from the Vichy French forces. Late in the month the 2/11th Field Regiment received word it would relieve the 1st Field Regiment of the Royal Artillery and that it would be attached to the British 6th Division, then in action near Jabel Mazar, in the Damascus Sector. The 2/11th was given little time to familiarise itself with the 25-pounders. It was soon under hostile artillery fire from the Vichy French but quickly returned fire. The 1st Field Regiment, assisted with personnel from the 2/11th Field Regiment.

Now part of the occupation force, in mid-July the regiment moved by train to Damascus, by bus to Qatana, and finally to Rayak airfield, home to 3 Squadron, RAAF, in the Bekaa Valley, Lebanon. The 2/11th was responsible for airfield security. In September the 2/11th moved to the Qatana area, about 20 miles from Damascus, where the men were able to spend their leave and also in Beirut. The unit remained in the Middle East until March 1942, when it and the 6th and 7th Divisions returned to Australia. However, rather than return as a single body, the regiment was divided into five groups and travelled to Australia.
In December the regiment received orders that it would move to Darwin to relieve the 2/14th Field Regiment. During this time, Darwin was bombed periodically by Japanese aircraft, with last raid taking place in November. The regiment remained in Darwin until September when it again embarked for overseas service, this time in New Guinea.

The 2/11th Field Regiment saw service at Nadzab, in the Markham Valley. The United States 5th Air Force had developed Nadzab into a major air base. While at Nadzab, men from the regiment helped develop the base and regiment’s quarters, trained in the jungle, and provided working parties to help load and unload ships at Lae.

After seven months in New Guinea, in April and May 1945 the regiment moved to Torokina, on Bougainville..