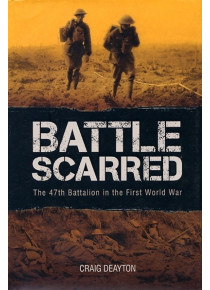 'Battle Scarred: The 47th Battalion in the First World War﻿' by  G. Deayton

HISTORY OF THE 47th BATTALION AIF

Battle Scarred The 47th Battalion WW1 Military History Book was printed in 2011 it is the first history ever written on the 47th Battalion in the 1st World War.
In 2003, Craig Deayton, the Author, came across the unpublished memoirs of a Tasmanian soldier who had served in the 47th Battalion, AIF. Vividly written, the memoirs included highly interesting accounts of their battles at Pozieres, Mouquet Farm, the Somme, Bullecourt, Messines, Passchendaele, Dernancourt and Amiens.

Discovering that no Battalion history existed for this unit, Craig applied for a grant from the Australian Army History Unit to conduct research, and travelled to Europe to trek across the former battlefields of the 47th Battalion in France and Belgium. To assist with his research he sought contact with the families of veterans. His early investigations revealed the fascinating, untold story of a particularly ill-starred battalion which had fought in some of the bloodiest battles and became one of the first disbanded due to heavy casualties and lack of reinforcements.

At the end of the war the original soldiers of the 47th gathered for one final photograph - 73 men were left.﻿

‘The dead and wounded of the 47th lay everywhere underfoot’ ... With these words Charles Bean, Australia’s Official War Historian, described the battlefield of Dernancourt on the morning of the 5th of April, 1918, strewn with the bodies of the Australian dead. It was the final tragic chapter in the story of the 47th Australian Infantry Battalion in the First World War.

The 47th Battalion fought in some of the First World War’s bloodiest battles. From their first calamitous experience of war under the terrible shell fire of Pozieres, to the costly and futile attacks on Mouquet Farm and the frigid winters on the Somme they suffered through the fighting on the Western Front in 1916. In April of 1917 they were trapped and almost surrounded at 1st Bullecourt. A mere eight weeks later, they ‘hopped the bags’ at Messines where they lost over half their number. In October they fought and died by the score in the mud of Passchendaele.

One of the shortest lived and most battle hardened of the 1st Australian Imperial Force’s battalions, the 47th was formed in Egypt in 1916 and disbanded two years later having suffered one of the highest casualty rates of any Australian unit. Their story is remarkable for many reasons. Dogged by command and discipline troubles and bled white by the desperate attrition battles of 1916 and 1917, they fought on against a determined and skilful enemy in battles where the fortunes of war seemed stacked against them at every turn. Not only did they have the misfortune to be called into some of the A.I.F.’s most costly campaigns, chance often found them in the worst places within those battles.

Finally, at the Battle of Dernancourt they fought in the 4th Division’s titanic struggle to save Amiens from the great German offensive of 1918. It was at Dernancourt that the 47th Battalion found itself squarely in the path of the heaviest attack ever faced by Australians in this or any war. Fatally weakened by their losses, and under a cloud after the formal inquiry into the battle, the 47th Battalion was broken up. For the Queenslanders and Tasmanians of the 47th Battalion,disbandment meant not only the loss of their battalion, but disgrace and heartbreak as well. Worse still, it meant the ties of comradeship and the bond to their fallen mates were severed at one stroke. In their own bitter words, they were ‘thrown away’’.

Though their story is one of almost unrelieved tragedy, it is also story of remarkable courage, endurance and heroism. It is the story of the 1st A.I.F. itself – punished, beaten, sometimes reviled for their indiscipline, they fought on - fewer,leaner and harder - until final victory was won. And at its end,in an extraordinary gesture of mateship, the remnants of the 47th Battalion reunited. Having been scattered to other units after their disbandment, the survivors gathered in Belgium for one last photo together. Only 73 remained.

The Appendixs contain some great information like every song with words that was sang at the Farewell Dinner for the 47th Battalion in France. A full member Nominal Roll , Roll of Honour complete this long overdue addition to Australia's Military Histories.

click to read further about the Famous 47th Battalion WW1