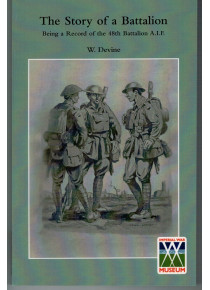 48th STORY OF A BATTALION Being a Record of the 48th Battalion A.I.F.

STORY OF A BATTALION Being a Record of the 48th Battalion A.I.F.  ' by W Devine. Devine was the Padre of the 48th Battalion. He was awarded a Military Cross medal for services. This book was compiled in France in 1919. The Bn. was formed in March 1916 in Egypt. It comprised a draft from the 16th Australian Inf. Bn. (survivors from Gallipoli) and fresh drafts from Australia.

Three months later the newly constituted Bn. was in action at Pozieres as part of the 12th Infantry Brigade, 4th Aust. Div. In 1917, the 48th Battalion suffered heavy losses at 1st Battle Bullecourt, but went on to serve at Passchendaele and in the defence of Amiens in 1918.
Its last action was at Bapaume, in September 1918.
In total, it suffered 2676 casualties, of which 840 were fatal.
Includes Roll of Honour & Honours and Awards.
Lest We Forget the 48th members 1914-18.
But even when Father Time and Mother Earth have claimed the last man, the A.I.F., like the soul of John Brown, will go marching on.
Its spirit can never die, its splendour never fade.