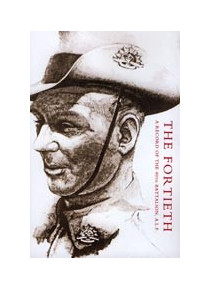 40th THE FORTIETH A Record of the 40th Battalion A.I.F.

THE FORTIETH A Record of the 40th Battalion A.I.F. ' by
F. C. Green with a forward from Sir John Monash . Green was a Captain in the
Battalion and Adjutant. Awarded a Military Cross medal for his services to Australia during WWI . He collected much of the information required to write this history before the Battalion left France at the end of the war. He compiled the text with the assistance of the numerous battalion members and many written documents/battalion diary/information. The book was first published in 1922.

The book being offered is a professionally produced reprint of that history. It is a true reproduction of the 1922 1st edition. Of course the value of an original copy of this history which was quite scarce is close to $750. Even these reprints escalate in value when they too become out of print. Here is your chance to obtain this book that can be treasured as a hand me down Family History Book.

Follows the 40th Battalion's 1st AIF history from its formation in Tasmania. The 40th was in some of the most severe fighting on the Western Front in the last two years of the war. Taking part in the Battles of Messines and Passchendaele ( 3rd Ypres) in 1917.

In October 1917 during the battle for Broodseinde Ridge Sergeant Lewis McGee
of B Company performed the act of valour that earned him the Victoria Cross.
In April 1918, the Battalion received much credit for its work against the German
offensives at Morlancourt . Later it took part in the Battle of Amiens on the
8th August 1918 which started the collapse of the German forces. The Battalion
won the town of Bray-sur-Somme single handed as the advance to the Hindenburg
line developed, and its final action was the successful breaching of that line.
Detailed text with 12 maps, Indexed.
By war's end the Battalion and Tasmania had suffered
the loss of 475 killed, 1714 wounded.