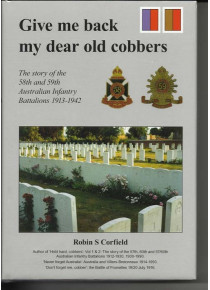 Give Me Back My Dear Old Cobbers 58th & 59th Battalions AIF

History of the 58th and 59th Australian Infantry Battalions of the 15th Brigade in the Great War.

Having only arrived in France on 23 June, the 58th and 59th Battalions became embroiled in its first major battle on the Western Front at Fromelles on 19 July. The battle was a disaster. The 59th attacked in the first wave, suffering heavy casualties at the hands of German machine-gunners, and its advance faltered far short of its objective. ?The 58th had the dual role of providing carrying parties and a reserve force. The reserve force (approximately half of the battalion) was ordered to attack late in the battle and was virtually annihilated by machine-gun fire; as a whole, the 58th suffered casualties equal to almost a third of its strength. Despite the grievous losses in its battalions, the 5th Division continued to man the front in the Fromelles sector for a further two months.

Early in 1917 the 58th battalion participated in the advance that followed the German retreat to the Hindenburg Line, but it was spared from the assault. It did, however, defend gains made during the second battle of Bullecourt, between 9 and 12 May. Later in the year, the AIF’s focus of operations switched to the Ypres sector in Belgium. The 58th’s major battle here was at Polygon Wood on 26 September.

The "mutiny" of the 59th Battalion is dealt with in some detail using diaries and reports from new sources. The book includes around 400 maps and images, complete Rolls of Honour, and a Nominal Roll of survivors for both battalions.
There is also a chapter on the 58th / 59th Bn, formed in 1942 from the two militia battalions and which fought in New Guinea and Bougainville.