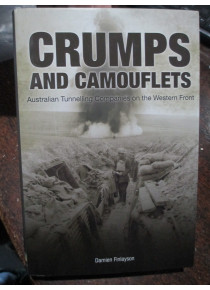 History of the Australian Tunnellers Crumps and Camouflets

This war book is the History of the Australian Tunnellers Companies in World War One.
If you are interested in the movie Beneath Hill 60 this book would be great further reading.

Below the shattered ground that separated the British and German infantry on the Western Front in the First World War, an unseen and largely unknown war was raging, fought by miners, ‘tunnellers’ as they were known. They knew that, at any moment, their lives could be extinguished without warning by hundreds of tonnes of collapsed earth and debris. Australian tunnelling companies took part in the battles of Fromelles, Arras, Messines, Passchendaele, Cambrai, the defence of Amiens, Lys, and the famous last 100 days.

Crumps and Camouflets, is the first complete history of Australia’s role in the tunnelling war of 1914-1919, of the men and units in which they served, and of life in the tomblike tunnels of the war underground.﻿
History of Australian miners and mining units mostly being part of the Engineer units.

The title of the book comes from WW1 slang:
Crump = Sound of a Bursting Shell
Camouflet = Subterranean cavity formed by a bomb exploding under the earth.

Great for campanion reading to Hill 60 movie.﻿
Click here to See DVD movie Beneath HILL 60
Click here to see the book THE TUNNELLERS