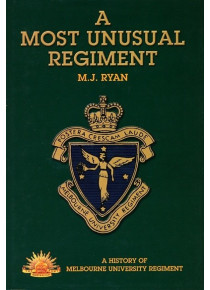 A Most Unusual Regiment: A History of Melbourne University Regiment﻿
by M. Ryan﻿ : new book

During the 100 years since formation, the Melbourne University Regiment has provided over 10000 officers and soldiers to the Australian Defence Forces.

Despite reorganisations, resource shortages and vagaries of policy, it has continued its production of leaders for all three services and the civil community with success, professionalism and a unique flair.

Interestly, the Regiment has never fought as a formed unit and its colours show no battle honours, although MUR graduates and present members have served and frequently distinguished themselves in, every major commitment of Australia's armed forces since Federation.

Past members include two Governors-General, two Prime Ministers and a Leader of the Opposition, three state Premiers, five Governors and a Lieutenant Governor of Victoria, two full Generals and Major- or Lieutenant-Generals (including three Chiefs of Reserves) and over ten thousand officers for the services.

The Regiment has consistently played its part in the national defence and in shaping the attitudes of its community to the frequently-vexed question of participation in the process.