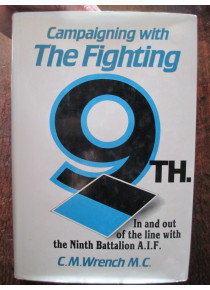 Clarie Wrench finished this book in his 88th year he served as a Lieutenant with the 9 th Battalion A.I.F. during World War One.

He joined the 9 Battalion as a Private and worked his way up through the ranks and was promoted to Lieutenant by 1918. He was awarded the MC for gallantry while leading his 9th Battalion platoon against a German machine gun post in the later part of 1918 during the Offensive.

After WWI he was a leading advocate for the 9th Battalion Association and lived for the Battalion.
His book has over 50 pages of its massive 598 pages dedicated to Gallipoli campaign and has much detail about the original landers including letters written by 9th members about the first landings.

Follows on with full history of the Battalion on the Western Front.
Huge on detail and a big book. Fully Indexed. Numerous printed photos and illustrations.
A great companion to ANZAC to the Hindenburg Line The History of the 9th Battalion A.I.F. 1914 - 1918 ' by N.K. Harvey which was written around 50 years prior to publishing of this book. Wrench utilised the information found in the +40 years of personal contributions to the Fighting 9 Battalion Newspaper.﻿