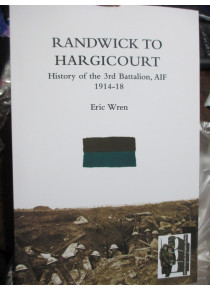 The Military History of the 3rd Battalion AIF was recorded by Captain Eric Wren, who was a member of the 3rd Battalion before being wounded during the Battle of Pozieres 1916. The book contains 80 illustrations, and the foreword has been written by Major-General Sir Nevill M. Smythe. V.C., K.C.B., who was in command of the 1st Australian Infantry Brigade from May 1915 to December 1916. In the foreword, he states that the 3rd Battalion "lost more men killed in action than any other Australian regiment and played a leading part in every epic victory of the infantry of the Commonwealth."

There are several valuable appendices, including a full unit nominal roll (showing fatal casualties), Honours and awards roll with a personal photograph in many cases.
The best reference source for the family history genealogy researcher.