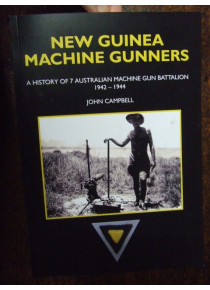 During WW2, the task set for Lieutenant-Colonel Terry Farrell, his officers and NCOs was to form, train and prepare for battle a new machine gun battalion. Using men from six 'E' (Vicker machine gun) companies from different infantry battalions, the newly-formed unit went on to serve in the defence of Port Moresby, Battle of Wau and at Milne Bay. This history contains a Nominal Roll, Honours and Awards and many maps and photographs.

The author's interest in machine gunners comes from his father being RSM of 6 MGB and two uncles who served in 2/1 Machine Gun Battalion during WW2.

A Honour Roll and a full member Nominal Roll compliments this history.

﻿This book importantly, documents the operations of an Australian Machine Gun Battalion in World War Two.