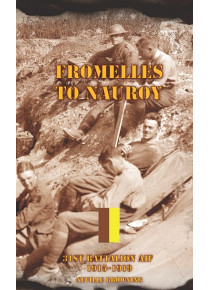 This book is the Australian Battalion History of the 31st Battalion AIF in World War I, from its formation in Brisbane Australia in 1915, to its disbandment in 1919.

Service followed in the trenches of Houplines, Flers, Bapaume and Lagnicourt. The 31st Bn moved to Belgium and fought in the Third Battle of Ypres. A magnificent attack was carried out at Polygon Wood, which culminated with Paddy Bugden being awarded a posthumous Victoria Cross.

Service in the trenches opposite Warneton followed during the bitter winter of 1917.

The 31st Battalion moved back to France during the German Spring Offensive, with service on the Somme, followed by the battle of Amiens, Villers-Carbonnel and the Hindenburg Line.

This history includes Nominal Rolls, Honour Roll, Awards, Nominal Index and a detailed list of POWs and their fate. The book has 280 photographs and maps that have been produced from period trench maps. The text includes a well-documented history of the events on the Western Front involving the 31st Battalion and uses eye-witness accounts from the men of the 31st to bring the history to life.