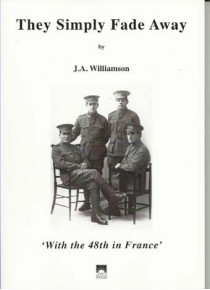 This war book is the concise History of the 48th Battalion AIF by a 48 Battalion Digger.

'They Simply Fade Away – with the 48th in France ' by John  Alexander Williamson, 1886–1971 who was born at Bonnyrigg, Scotland and emigrated to Australia in 1911. Williamson enlisted in the AIF on the 23rd May 1916, at Belmont Western Australia. He was allotted service number 2759A, with the 48th Battalion. He was taken on strength with the 48th in France on the 9th July 1917. Wounded in Action on the 23rd March 1918 during the German spring offensive, he had received a gun shot wound to his left arm. The wound was severe enough to receive not only his 'Blighty' but also his ticket back home to Australia.

After the war,Williamson tested his writing skills in The Western Mail columns. Using the non-de-plume of “Don Zed (48th), Perth” he published anecdotes and reminiscences of his war experiences. One of these has been included as an appendix in this book.

He wrote this book about his reminiscences and sent it to The Western Mail in 1936, the editor, Cyril Longmore (author of the 16th Battlalion history), said “Without any hesitation I say it is a splendid effort, and in the literary sense far above the majority of the war books I have read, many of them really good books too. I am sure that Angus and Robertson will publish it for you. …and congratulations on a first class bit of work.”

Unfortunately, A&R did not publish the book. But in 1939, Longmore
serialized it in his ‘Digger’s Diary’ newspaper column with extensive advertising, and to the acclaim of many veterans and family of members.﻿

This recently printed book is in fact the 1st edition of this long awaited history.