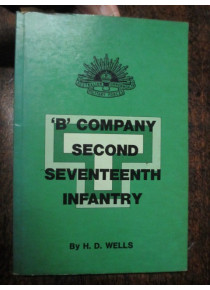 This book is signed by D Stewart nx73422 C Company of the Battalion.

The battalion were present during the attack to capture Tobruk at Easter. The 2/17th held against German tanks and enemy infantry advance . The battle proved to be a success for the Battalion as the German tanks were destroyed. Corporal John Edmondson was posthumously awarded Australia’s first Victoria Cross﻿. It was during the Battle of El Alamein that the battalion performed with distinction from 23 October to 5 November 1942.﻿
After returning to Australia to fight the Japanese, the battalion made an amphibious landing at Lae and Finschhafen.﻿