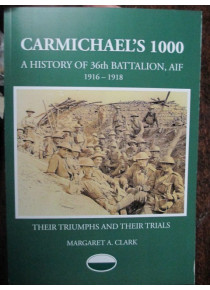 Carmichael's 1000 A History of the 36th Battalion AIF by M. Clark

During WW1, the Hon. Ambrose C. Carmichael took leave of absence from NSW Parliament where he was Minister for Public Information. He wanted to recruit a battalion (a battalion is made of 1,000 men) for the war effort.

Carmichael made a recruiting drive largely utilising the rifle clubs throughout the state. Mostly by his efforts, the 36th Battalion AIF was raised at Newcastle in early 1916.

Thus the Battalion (nickname) become known as Carmichael's 1000. He set off with the Battalion as a Lieutenant in A Company for service on the Western Front. He was awarded the Military Cross Medal and was wounded.

He returned to Sydney in February 1918, where he started another recruitment drive and was successfully raising another 'Carmichael's Thousand' when the 1st World War ended.

The 36th Infantry Battalion battle honours included, Battle of Messines, 3rd Ypres, Polygon Wood, reserve at Broodseinde Ridge  Passchendaele , Defence of Amiens at Villers-Bretonneux  fought at Hangard Wood. Due to the reduction in new recruits and the toll of casualties the Battalion was disbanded in early 1918.
This Battalion Unit History is the first ever written about the triumphs of the 36th Bn.
A larger history at 350 pages an Embarkation Roll of members completes this valuable addition to Australian Military History.