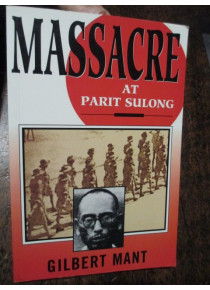 Parit Sulong is a small town in Johor, Malaysia on the Simpang Kiri River, 30 km east of Muar.
The historical Parit Sulong Bridge constructed during World War II is a main feature in that town. The first large massacre of 161 Australian troops by Japanese forces occurred at Parit Sulong on the west coast of Malaya on 22 January 1942.

Wounded survivors from the Battle of Muar who could not travel on foot were left at Parit Sulong when the remnants of the greatly outnumbered force of Australians and Indians escaped from the Japanese who were surrounded them. The Japanese soldiers delighted in kicking and hitting the prisoners with rifle butts.

They forced them into an overcrowded shed and denied them food, water and medical attention. At sunset, those able to walk were roped or wired together and were led away. The Japanese collected petrol from the Allied vehicles which had been left stranded, shot and bayoneted their prisoners, threw petrol upon them and ignited them. The officer who ordered the massacre, Lt General Takuma Nishimura, was tried and convicted of war crimes and executed by hanging on 11 June 1951.

This book covers this Massacre, the Battle of Muar, and the fate of survivors who become POW on the Thai Burma Railway. The Battle of Muar was the confict that the Australian 2/19th Battalion accompanied by Indian units fought against the Japanese invasion of the Malaysian Peninsular.
The Australians were commanded by Charles G W Anderson VC, MC. During the period of 18–22 January 1942 at the Battle of Muar, Anderson was in command of a small force which destroyed ten enemy tanks. The pictures of which have become famous. He was awarded the Victoria Cross for leadership and gallantry at the Battle of Muar.