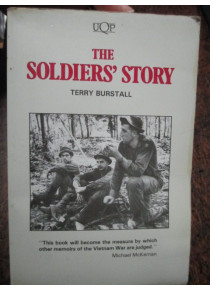 The Soldiers' Story ' by Terry Burstall.

The Soldiers' Story ' by Terry Burstall.
As the Title states this was written by Burstall who took part in the Battle. What makes this book quite different to others on the Battle is that this book was the first veteran recollection book ever published - dedicated solely to the battle. Burstall was able to put together a very detailed diary of events which happened on that day.﻿

The most notable Australian Battle of the Vietnam War 'Long Tan". It was the late afternoon of August 18th 1966. For three hours , in the pouring rain, amid the mud and shattered trees of the Long Tan rubber plantation in Phuoc Tuy Province, the dispersed D company ( 6th Battalion ) of 100 Australians had been fighting for their lives , holding off a force of some 2500 Vietnamese. Gaurantee this book is huge on Australian Vietnam detail and also has some great photo plates extremely clear high quality prints. 100% Australian Vietnam has a list of Soldiers taking part in the action and decorations awarded.