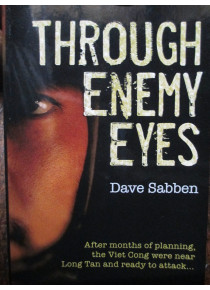 Through Enemy Eyes﻿ by D Sabben

This Australian Vietnam War book follows the events from May to August 1966 - the first four months of the establishment of the Australian task force base at a hill named 'Nui Dat' in Phuoc Tuy Province, South Vietnam... as seen "through enemy eyes".

In particular, the analysis of the Battle of Long Tan which occurred on the 18th August 1966. The book is based on detailed research by the author Dave Sabben, one of the Australian platoon commanders of Delta 6RAR during the Battle of Long Tan.﻿﻿ Sabben's courageous effort to reach the beleaguered 11 Platoon is well depicted in the movie Danger Close. ﻿

Click to SEE all our Battle of Long Tan Books﻿

"Your ability to present the factional enemy events before, during and after the battle I believe is very close to the known facts of the time." "Congratulations Dave ... you have joined the loose ends to close the circle. The ambush myth is now in pieces like so many of the enemy that day." - Bob Buick MM - Viet Vet - Sergeant of 11 Platoon D Company 6RAR at Battle of Long Tan 18th August 1966.