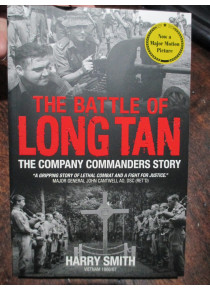 This book was used for research of the Danger Close movie.

From 8th June 1966 to 14th June 1967, the author Harry Smith SG MC was the Commanding Officer of 6 Company 6 RAR during its tour of the  Vietnam War.
On the night of the 17 August 1966 there was heavy mortar shelling of the Australian base at Nui Dat. Next day, the 18 August, Australian forces comprised of 108 men from D company 6 Battalion Royal Australian Regiment went to locate the Vietnam units responsible for the shelling. Led by Major Smith the men entered a rubber plantation at Long Tan during the afternoon.

They encountered a reinforced Regiment sized Vietnamese force of up to 2500 Viet Cong and North Vietnamese Army troops.

This action become known as the Battle of Long Tan. 18 Australians were killed and 24 wounded with at least 245 Vietnamese confirmed as killed. Later captured documents confirmed a count at well over 500 enemy killed and 800 wounded.

Major Harry Smith was awarded the Military Cross for his brave leadership of his men at Long Tan. His remarkable book tells the true story of the historic battle, taking his readers on an extraordinary journey regarding better recognition for the Long Tan veterans and his lifelong battle.