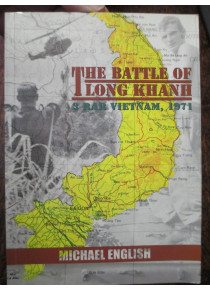 The Battle of Long Khanh (6–7 June 1971) was fought during the Vietnam War between elements of 1st Australian Task Force (1 ATF) and the Viet Cong and North Vietnamese Army during Operation Overlord. The fighting saw Australian infantry from 3rd Battalion, Royal Australian Regiment (3 RAR) attack a heavily fortified communist base camp in Long Khanh province, while Centurion tanks providing close support crushed many bunkers and their occupants.

Regardless, the Viet Cong fought hard to delay the Australian advance and although the bunker system was subsequently captured, along with a second system further south, the Australians suffered a number of casualties and the loss of a UH-1 Iroquois helicopter.
With the Australians unable to concentrate sufficient combat power to achieve a decisive result, the bulk of the communist force successfully withdrew intact, although they likely sustained heavy casualties in the process.
A scarce Australian Vietnam Book - published as an Australian Army Training Book. A Honour Roll showing both KIA and Wounded .