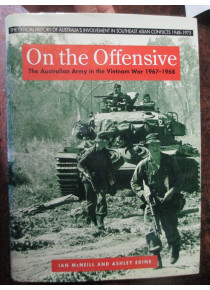 The Vietnam War military book ' On the Offensive ' is the eighth volume of the Official History of Australia's involvement in Southeast Asian Conflicts 1948-1975, and the second of three volumes on Australian ground operations in Vietnam.

On the Offensive tells the story of the Australian Army in Vietnam in the most tumultuous period of the Vietnam War. It is the successor volume to Ian McNeill's highly acclaimed To Long Tan and the eighth volume of The Official History of Australia's Involvement in Southeast Asian Conflicts 1948-1975.

This volume shows how the Australian Task Force coped with the difficulties and dangers of operating with two infantry battalions and limited resources against an elusive and aggressive enemy. It describes the construction of the controversial barrier minefield and the consequences and failure of this project. It also covers the pivotal Tet Offensive and the Australian response which culminated in the fierce actions around Fire Support Bases Coral and Balmoral as Australian soldiers fought their most sustained and intensive battles of the Vietnam War. Included is a new interpretation of the failures in planning and execution of operations on the eve of the major battles around Fire Support Base Coral which almost resulted in disaster for the Australian force.

Authors Ian McNeill and Ashley Ekins have had unrestricted access to official government records, including highly classified defence files. They have supplemented this material with extensive interviews with participants, personal papers and correspondence, discussions with former Viet Cong and communist Vietnamese histories. Their work is marked by unflinching critical analysis and candour about the successes and failures of the Australian Army experience in Vietnam and covers the Australian involvement in Vietnam at virtually every level, from the senior commanders and planners to the experiences of infantrymen on patrol and in contact with the enemy. The product of years of intensive work, On the Offensive throws light on the experience of Australian soldiers in Vietnam in a way that has not been possible before.