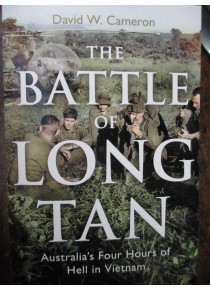 David Cameron has been acclaimed for writing definitive history books about Australia's Gallipoli campaign. With this book, David ventured into the reality of being able to talk to the veterans who were actually present at the battle.
Click to see all Battle of Long Tan Danger Close Books

Thus this is a minute by minute account of the happenings during the Battle of Long Tan 18th of August 1966. The 400 page study is supported with many photos of the soldiers who took part in the Battle.﻿

David said in a Canberra Times interview, "It was an experience writing a book where I was able to speak to the vets who were there and ask them questions," Mr Cameron said.﻿ "Normally I'm writing about things that happened 100 years ago and you don't get the chance to speak with anyone then. Even 50 years on, the memories of the veterans remain very vivid."
The story of the Battle of Long Tan has now been etched into Australian history. The date of which has become Vietnam Veterans Day.﻿

David has a passion for recording the overarching history of Gallipoli. He has written no less than six books on the Battle. He is also internationally known as an expert on primate and human evolution and has a degree in both archaeology and palaeoanthropology.

David was born in 1961 in Darlinghurst and grew up in Bondi before moving to Campbelltown in the early 1970’s when it was still a ‘town’. He graduated with 1st Class Honours from the University of Sydney (Prehistory) in 1989 and with a PhD from the Australian National University (Palaeoanthropology) in 1995.

He was formerly an Australian Research Council QEII Fellow at the Department of Anatomy & Histology at the University of Sydney. He has conducted numerous international archaeological and palaeonathropological excavations in Europe, Middle East and Asia. David is married with three children (and two dogs).