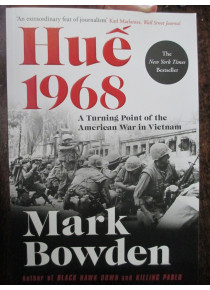 Not since his #1 New York Times bestseller Black Hawk Down has Mark Bowden written a book about a battle. His most ambitious work yet, Hue 1968 is the story of the centrepiece of the Tet Offensive and a turning point in the American War in Vietnam.

By January 1968, despite an influx of half a million American troops, the fighting in Vietnam seemed to be at a stalemate. Yet General William Westmoreland, commander of American forces, announced a new phase of the war in which 'the end begins to come into view.' The North Vietnamese had different ideas. In mid-1967, the leadership in Hanoi had started planning an offensive intended to win the war in a single stroke. Part military action and part popular uprising, the Tet Offensive included attacks across South Vietnam, but the most dramatic and successful would be the capture of Hue, the country's cultural capital. At 2:30 a.m. on January 31, 10,000 National Liberation Front troops descended from hidden camps and surged across the city of 140,000.

By morning, all of Hue was in enemy hands but for two small military outposts.﻿
The ARVN outpost in the northeast of the Citadel and the American MACV Compound on the south bank over the Perfume River.

Australian AATTV were stationed at the MACV compound and helped fighting off the onslaught.