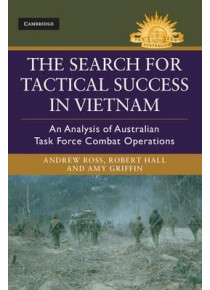 The Search for Tactical Success in Vietnam An Analysis of Australian Task Force Combat Operations By: A Ross, R Hall, B Hall, A Griffin

The Search for Tactical Success in Vietnam

Comprehensive﻿ study of the tactics and achievements of the First Australian Task Force ( 1ATF ) in Phuoc Tuy Province,﻿ 1966 to 1971﻿.

The partnership between the Australian Army and Cambridge University Press aims to produce high quality military history for a world-wide audience. Focused on the history of the Army, its people and its role in the development of the nation, the Australian Army History Series provides readers with fresh, academically rigourous titles written by the nation's pre-eminent military historians.