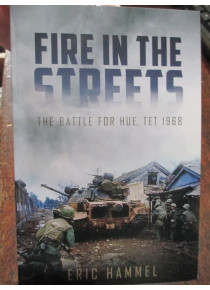 Fire In The Streets The Battle For HUE TET 1968

In February 1968, the North Vietnamese forces were able to infiltrate and capture the old City of Hue. Only two small bastions survived the initial assault, ARVN Forces in the Citadel and the US Marine MACV Base in southern Hue - a number of Australian AATTV advisors were located at MACV HUE.
This is the intense story of that battle.