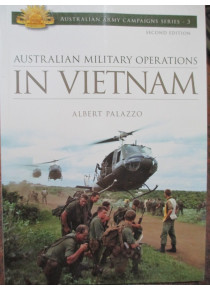 This war book gives a detailed but easy read of Australians in the Vietnam War.
These Australian Army published Campaign Series books not only cover the full Military Operations but also provide excellent coverage of weapons used during the Battles.
The Battle maps and other graphics are superb.
Surprisingly, many of the Australian Operations are covered which do not normally receive much attention even in higher priced historical publications.

For example, Operation Robin which was a Route 15 highway security operation undertaken between 11 and 16 October 1966 by ATF including 5 RAR and 6 RAR. A precise map is included which would be beneficial for a visitation to area in Vietnam today.

This book is the Australian Army Campaign Series No. 3