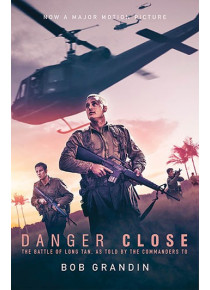 Danger Close The Battle of Long Tan The Book

Those in direct command of Delta Company share their memories of the most significant Battle fought by Australians in Vietnam, the Battle of Long Tan 18th August 1966. The author Bob Grandin was a Huey chopper pilot who resupplied ammo during the Battle. His memories are amalgamated together with major contributions from Bob Buick, David Sabben and Harry Smith. Bob has recently released a new book of his time in Vietnam titled Answering the Call

Following movie trailer is not part of book sale.

The commanders describe the experiences that brought them to Vietnam, and how Company commander Harry Smith drove Delta Company to become one of the most outstanding units in the Australian forces. Each platoon played a crucial role in Delta Company's survival.

The artillery's commitment in providing an unbroken wall of metal through which the enemy had to advance is told from the perspectives of both the forward controller and the gun positions.

We fly with the RAAF helicopter pilots whose ammunition resupply was the turning point of the battle, and experience the carnage of the battlefield through the eyes of those in the relieving APCs.

The trauma of the battle did not end with the action, however, as politics began to play its part in the drama. The valour of those directly involved in the battle was never duly recognised. The ongoing efforts of the Long Tan commanders to right the many wrongs perpetrated in the wake of the battle, and their own journeys from the events of August 1966 draw the reader into a compelling dialogue on the aftermath of Vietnam.

Click to SEE all our Battle of Long Tan Books

A recent SMH Danger Close interview said, 'Bob Grandin has a vivid memory of flying a helicopter to resupply ammunition to besieged Australian troops during one of the decisive battles of the Vietnam War. "It was terrifying," he says. "I thought it was a suicide mission." Then Flight Lieutenant Grandin was a 25-year-old who had just arrived in Vietnam. He'd started that day flying Little Pattie and Col Joye into the base for a concert for the troops in August 1966.' When the Battle of Long Tan broke out in a rubber plantation four kilometres away, the entertainers had to be evacuated and two helicopters became crucial to the survival of just over 100 Australian and New Zealand troops fighting more than 2000 enemy soldiers.'

Please note this book has been previously published as The Battle of Long Tan: As told by the Commanders.