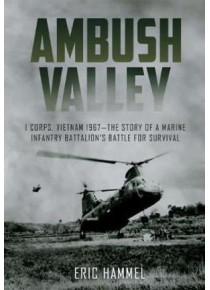 Ambush Valley I Corps, Vietnam 1967 - the Story of a Marine Infantry Battalion's Battle for Survival

Ambush Valley I Corps, Vietnam 1967 - the Story of a Marine Infantry Battalion's Battle for Survival By: E Hammel

Ambush Valley is an unforgettable account of bravery and survival under impossible conditions during the Vietnam War. In the summer of 1967, the Marines in I Corps, South Vietnam's northernmost military region, were doing eveything they could to lighten the pressure on the besieged Con Thien Combat Base.

Still fresh after months of relatively light action around Khe Sanh, the 3d Battalion, 26th Marines, was sent to the Con Thien region to secure the combat bases' endangered main supply route. On September 7, 1967, its first full day in the new area of operations, separate elements of the battalion were attacked by at least two battalions of North Vietnamese infantry, and both were nearly overrun in night-long battles. On September 10, while advancing to a new sector near Con Thien, the 3d Battalion, 26th Marines, was attacked by at least a full North Vietnamese regiment, the same NVA unit that had attacked it two days earlier. Isolated into two separate defensive perimeters, the Marines battled through the afternoon and evening against repeated assaults by waves of NVA regulars intent upon achieving a major victory. In a battle described as "Custer's Last Stand - With Air Support," the Americans prevailed by the narrowest of margins. Ambush Valley is an unforgettable account of bravery and survival under impossible conditions. It is told entirely in the words of the men who faced the ordeal together - an unprecedented mosaic of action and emotion woven into an incredibly clear and vivid combat narrative by one of today's most effective military historians. Ambush Valley achieves a new standard for oral history. It's a war story not to be missed.﻿