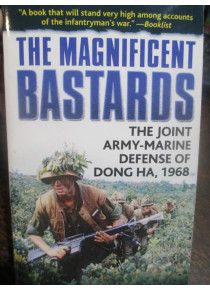 On April 29, 1968, the North Vietnamese Army is spotted less than four miles from the U.S. Marines' Dong Ha Combat Base. Intense fighting develops in nearby Dai Do as the 2nd Battalion, 4th Marines, known as "the Magnificent Bastards," struggles to eject NVA forces from this strategic position.

Yet the BLT 2/4 Marines defy the brutal onslaught. Pressing forward, America's finest warriors rout the NVA from their fortress-hamlets-often in deadly hand-to-hand combat. At the end of two weeks of desperate, grinding battles, the Marines and the infantry battalion supporting them are torn to shreds. But against all odds, they beat back their savage adversary.

"The Magnificent Bastards "captures that gripping conflict in all its horror, hell, and heroism.

"Superb . . . among the best writing on the Vietnam War . . . Nolan has skillfully woven operational records and oral history into a fascinating narrative that puts the reader in the thick of the action."﻿