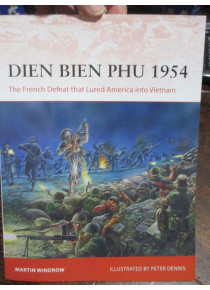 $35.00
DIEN BIEN PHU 1954 VIETNAM WAR OSPREY CAMPAIGN SERIES NEW BOOK
A highly regarded study of the battle at Dien Bien Phu, the 56-day siege that eventually led to the surrender of the remaining French-led forces, this iconic battle provided the climax of the First Indochina War. During the American Vietnam War there was constant comparisons made by the Americans regarding the French defeat at Dien Bien Phu. One of the more famous was President Johnson's 1968 assertion that he did not want, "Any damn Dien Bien Phu" when discussing tactics at Khe Sanh.