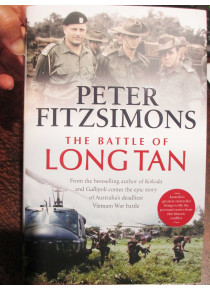 The Battle of Long Tan By Peter FitzSimons

It was the afternoon of 18 August 1966, hot, humid with grey monsoonal skies. D Company, 6RAR were four kilometres east of their Nui Dat base, on patrol in a rubber plantation not far from the abandoned village of Long Tan. A day after their base had suffered a mortar strike, they were looking for Viet Cong soldiers.

Then - just when they were least expecting - they found them. Under withering fire, some Diggers perished, some were grievously wounded, the rest fought on, as they remained under sustained attack.

For hours these men fought for their lives against the enemy onslaught. The skies opened and the rain fell as ferocious mortar and automatic fire pinned them down. Snipers shot at close quarters from the trees that surrounded them. The Aussie, Kiwi and Yankee artillery batteries knew it was up to them but, outnumbered and running out of ammunition they fired, loaded, fired as Viet Cong and North Vietnamese Army forces just kept coming. And coming.

Their only hope was if Armoured Personnel Carriers (APCs) could reach them before they were wiped out. The APCs did their best but low cloud and thunderstorms meant air support was stalled. A daring helicopter resupply mission was suggested but who would want to fly that? The odds against this small force were monumental...

By far the deadliest battle for Australian forces in Vietnam, the Battle of Long Tan has a proud place in the annals of Australian military history - and every ANZAC who fought there could hold his head high.