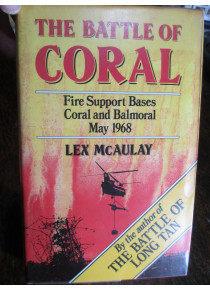 THE BATTLE OF CORAL - VIETNAM FIRE SUPPORT BASES CORAL AND BALMORAL , MAY 1968. ' by L.MCAULAY -

THE BATTLE OF CORAL - VIETNAM FIRE SUPPORT BASES CORAL AND BALMORAL , MAY 1968. ' by MCAULAY, LEX. . This Battle was a major Australian military operation during the Vietnam War, 1st Australian Task Force. This book gives the overall history of Australian involvement in the Battle.

Fire Support Bases "Coral" and "Balmoral", Vietnam During the "Mini-Tet" offensive mounted by Viet Cong and North Vietnamese forces in May 1968, the 1st Australian Task Force deployed two battalions to an area twenty kilometres north of Bien Hoa city to intercept and disrupt the approach of enemy forces towards the capital, Saigon, or the Bien Hoa-Long Binh base complex.

Several fire support bases (FSBs) were established to provide defended firing points for artillery and mortars which would cover foot patrols to be sent out by the battalions (1 and 3 RAR). One of these FSBs was dubbed "Coral", situated seven kilometres north of the town of Tan Uyen. Occupation of Coral was begun on 12 May, but the defences remained unfinished when, at about 3.30 am on 13 May, it was attacked following a brief but intense rocket and mortar barrage. The 1RAR mortar platoon position was over-run, along with one of the 102 Field Battery's six 105 mm M2A2 howitzers in the base. With the aid of extensive air support, the attack was beaten off by 6.30 am and the captured gun-pit was retaken - still with the gun in it (this howitzer is now in the Memorial's collection). Eleven Australians were killed and 28 wounded, while the attackers lost more than the 52 bodies they left behind. A further three Australians died in patrol clashes on the 14 May. At 2.15 am on 16 May Coral again came under attack, this time from a North Vietnamese Army (NVA) force estimated at three battalions strong. The base was now defended by armoured personnel carriers of A Squadron, 3rd Cavalry Regiment, and 1RAR's rifle companies, all of which were heavily engaged; part of the A Company position was occupied for a period, but the enemy was forced to withdraw. The attack was repelled after four hours of fighting, with the Australians having suffered five men killed and nineteen wounded. Two members of an American battery which had reinforced the base were also wounded. Only 34 enemy bodies were recovered, but blood trails and drag marks indicated that many more casualties had been removed.

On 22 May Coral was subjected to yet another rocket and mortar barrage, but this time the NVA troops were dispersed by return fire from 1RAR's mortars as they formed up to attack. Although there were further bombardments on 26 and 28 May, and patrols sent out from the base came into contact with the enemy, Coral was not seriously threatened again. During fighting on 26 May the base's defenders even turned the tables on the NVA by sending a troop of Centurion tanks from C Squadron, 1st Armoured Regiment (which had arrived as reinforcements three days earlier), outside the perimeter wire with infantry support; these engaged and destroyed most of a NVA bunker system that had been discovered. Enemy efforts on 26 May were primarily focused on another FSB named "Balmoral", which was established about 4.5 kilometres further north on 24-25 May by 3RAR supported by tanks. The defenders easily threw back assaults launched against Balmoral on 26 and 28 May. On the latter occasion, the attacking NVA regiment lost at least 42 killed and seven prisoners, but again
casualties were thought to have been higher.