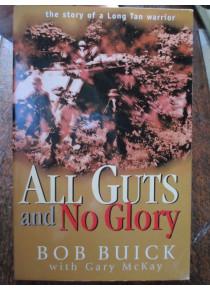 All Guts and No Glory: the Story of a Long Tan Warrior

All Guts and No Glory by B Buick with G. McKay new book

All Guts & No Glory

This war book is the history of Australians During Battle of Long Tan﻿ Vietnam War .﻿

All Guts and No Glory is a no-pulled-punches account, covering all the major actions Buick's platoon encountered. It brings to life the frustrating, gut-wrenching and sorrowful experience of those who served as infantry warriors in Vietnam, only to come home to an apathetic and sometimes hostile public. This is a poignant reminder of what combat, infantry soldiering and the Viet Nam war was all about. All Guts and No Glory also debunks the myths, lies and legends of the Long Tan Battle.

Bob Buick has collaborated with one of Australia's best-known authors of the Vietnam era, Gary McKay, MC, himself a Viet Nam veteran and infantryman, to write this first-hand description of the Long Tan Battle and other operations against the Viet Cong and the North Vietnamese Army.
Appendixs of Nominal Roll of all Diggers at the Battle Long Tan in company order , Casualties, Honours and Awards complete this book. -