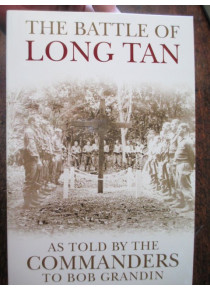 The Battle of Long Tan as Told by the Commanders to Bob Grandin : new book

The Battle of Long Tan as Told by the Commanders to Bob Grandin ' by B. Grandin H. Smith G Kendall B. Buick D. Sabben M. Stanley A. Roberts.
Harry Smith - OC Delta Co 6RAR
Geoff Kendall - 10 Platoon CO
Bob Buick - 11 Platoon Sergeant
Dave Sabben - 12 Platoon CO
Morrie Stanley - FOO 161 Battaery RNZA
Adrian Roberts - 3 Troop CO No 1APC Sqn
Bob Grandin - Pilot 9th Sqn RAAF
They Should Know they were THERE and in Command !
As the Title states this was written by the various Commanders who took part in the Battle. This makes this book quite different to others on the Battle as it puts together a very detailed diary of events which happened on that day.The most notable Australian Battle of the Vietnam War 'Long Tan". It was the late afternoon of August 18th 1966. For three hours , in the pouring rain, amid the mud and shattered trees of the Long Tan rubber plantation in Phuoc Tuy Province, the dispersed D company ( 6th Battalion ) of 100 Australians had been fighting for their lives , holding off a force of some 2500 Vietnamese. Gaurantee this book is huge on Australian Vietnam detail. We thank Major Harry Smith and D Company for their heroic stand and remember our 17 brave boys who lost their lives -
Lest We Forget
Sharp , Jewry , Aldersea , Drabble , Kenny Gant , Grant , Grice , Houston , Large , A. F. McCormack , D.J. McCormack , Mitchell , Salveron , Thomas , Topp , Wales , Whiston.