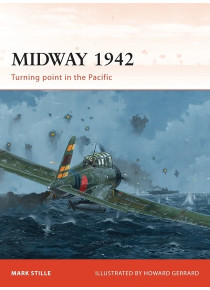 The most important and dramatic carrier battle of World War II, which completely changed the fortunes of both Japan and America.﻿

In less than one day, the might of the Imperial Japanese Navy was destroyed and four of her great aircraft carriers sank burning into the dark depths of the Pacific. Utilizing the latest research and detailed combat maps, this book tells the dramatic story of the Japanese assault on Midway Island and the American ambush that changed the face of the Pacific war. With sections on commanders, opposing forces, and a blow-by-blow account of the action, this volume gives a complete understanding of the strategy, the tactics, and the human drama that made up the Midway campaign, and its place as the turning point in the Pacific war.﻿