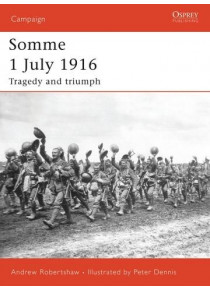 Unlike the joyous cover photo, showing troops going towards jump off positions. The first day of the Battle of the Somme was a day of tragedy for the British Army, with the slaughter of 60,000 men on the battlefield.

What seemed to be poor planning on the part of the British command meant that soldiers were sent into no man's land to face the horrors of uncut barbed wire and waves of German machine gun fire. However, there were triumphs amongst the tragedy. This book discusses the successes and failures of the British and the German forces along the frontline. It also offers a detailed account of the battle itself, following the actions of individual units throughout the day.﻿