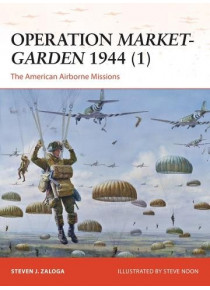 When visiting the battlefield its a great idea to obtain these Osprey books.
They are precise straight to the main points and are packed with easy to follow maps and pics.

In the summer of 1944, plans began for a complex operation to seize a Rhine river bridge at Arnhem in the Netherlands. The American portion of the airborne mission was to employ two divisions of the US XVIII Airborne Corps to seize key terrain features that otherwise might delay the advance of British tanks towards the bridge. The 82nd and 101st Airborne Divisions (Band of Brothers) succeeded in their tasks of capturing the vital bridges at Eindhoven at Nijmegen in the face of fierce German resistance.

However, the delays caused to the British armored advance, combined with stronger than expected fighting at Arnhem led to the withdrawal of the remnants of the British 1st Airborne Division in one of the Western Allies' most costly defeats of World War II. Contemporary photographs, maps and detailed color artwork complement extensive archival research that reveals the successes of those American airborne missions, largely overshadowed by the failure of the operation as a whole. ﻿