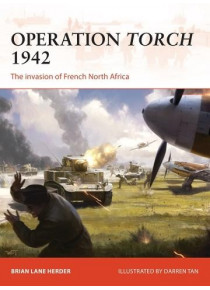 Operation Torch is most times forgotten as the first amphibious invasion of the European war. Following the raid on Pearl Harbor and the entry of the United States into World War II, President Franklin D. Roosevelt identified the European theatre as his country 's priority. Their first joint operation with the British was an amphibious invasion of French North Africa, designed to relieve pressure on their new Soviet allies, eliminate the threat of the French navy joining the Germans, and to shore up the vulnerability of British imperial possessions and trade routes through the Mediterranean.

Operation Torch was the largest and most complex amphibious invasion of its time. In November 1942, three landings took place simultaneously across the French North African coast in an ambitious attempt to trap and annihilate the Axis ' North African armies between the invading forces under General Eisenhower and British Field-Marshall Montgomery 's Eighth Army in Egypt. Using full colour artwork, maps and contemporary photographs, this is the thrilling story of this complex operation.﻿