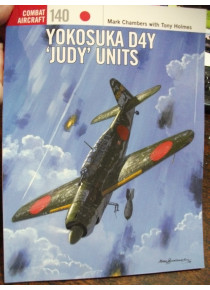 $33.00
Yokosuka Day 'Judy' Units by Osprey Books
In 1938, the Yokosuka Naval Air Technical Arsenal, acting under the requirements issued by the Kaigun Koku Hombu for a Navy Experimental 13-Shi Carrier Borne specification for a dive-bomber to replace the venerable 'Val' aboard carriers. The resulting D4Y Suisei (Comet), codenamed Judy by the Allies, was initially powered by a licence-built German Daimler-Benz DB 601 inline engine as used in the Bf 109E. Despite making an inauspicious combat debut during the Battle of Midway in June 1942, the 'Judy' eventually proved to be an important asset for the IJNAF during battles in the latter years of the Pacific War. Its great successes resulted in the sinking of the escort carrier USS Princeton in an early kamikaze attack of the Philippines and the near sinking of the fleet carrier USS Franklin in a dive-bombing attack off Japan.

While the Judy had an impressive top-speed, like its predecessor, and many other Japanese military aircraft, it possessed design shortcomings including inadequate armor protection for its aircrew and no self-sealing fuel tanks. As a result, when pitted against new, advanced US Navy fighters suffered horrendous losses.

During the final months of World War 2 it became apparent that there would be no Japanese victory. Acting out of desperation, the IJNAF employed the 'Judy' in the dreaded kamikaze role, in which it excelled due to its high-speed characteristics. Most notably, the D4Y mounted one of the last combat actions of World War 2 when a flight of 11 Judies, personally led by the instigator of the suicide attacks, Vice Admiral Matome Ugaki, took off on a 'search mission' on August 15, 1945. This volume chronicles the action-packed wartime exploits of Japan's finest dive-bomber of World War 2.