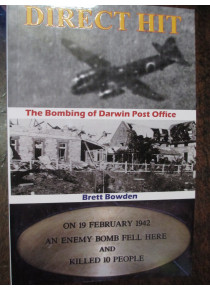 This book focuses on the Bombing of Darwin Post Office by the Japanese air raid which took place on the 19th February 1942 during WW2. Indepth study of the people (ten were killed), the building and even the bombs that were dropped.
Has a biographical Honour Roll, including a chapter on the survivors.
For researchers there are some important lists within the appendix these include;
List of Japanese air raids on Australian mainland
Air raids on Darwin and surrounds with date, enemy aircraft taking part, and the target. There was a total of 64 air raids on Darwin the last taking part on 12 November 1943.
Lists the PMG staff in Darwin on 19 February 1942 and then movements thereafter.

A very important book for the researchers of the Darwin bombing.