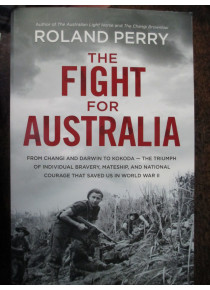 The Fight for Australia From Changi and Darwin to Kokoda

The Fight for Australia From Changi and Darwin to Kokoda - Our Battle for Survival in World War II by R. Perry

The compelling story of Australia's desperate fight for survival during World War II.

In the dark days following the Fall of Singapore in Februrary 1942, Australia faced its toughest ever battle . Our country was under direct attack from seemingly invincible Japanese forces. Winston Churchill was demanding our best battle-hardened troops stay in North Africa while President Roosevelt called for them to fight the Japanese in Burma. But Prime Minister John Curtin insisted, in an act of defiance, that they return to defend their homeland.

Australia had never been more isolated strategically, politically and physically. Or less prepared. In this masterful and gripping account, Roland Perry brings to life the bravery of our fellow Australians: from the forces engaged in brutal frontline fighting in the jungle, sea and air, to the backroom strategic campaigns waged by our politicians, and the sacrifices made on the home front.

Please Note:
This Title has previously been released under the title 'PACIFIC 360'.