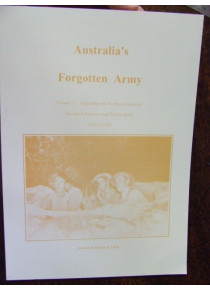 Defence of Darwin and Northern Territory

This war book is a History of unit movements and bases in Darwin Northern Territory WW2.

Australia's Forgotten Army Vol 2 defending the Northern Gateways Northern Territory and Torres Strait' by G R Mckenzie Smith. On Wednesday 18 February 1942 the Japanese air force bombed Darwin. This fact is known to most Australians, but very few know exactly how it happened or the detail of the defence of Darwin. It was well known the Japanese were coming this book shows the movement of units in and out of NT and Qld between 1938 and 1945. Great detail showing the Fortess Darwin supported with maps and illustrations.