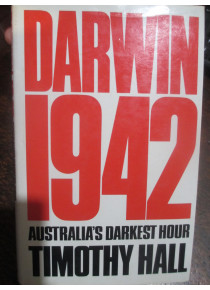 This war book titled DARWIN 1942 - Australia's Darkest Hour ' by T Hall is a general history on Darwin during WW2.

On Wednesday 18 February 1942 the Japanese air force bombed Darwin. This fact is known to most Australians, but very few know exactly how it happened. The War Cabinet immediately ordered a news black-out, and the propoganda they released at the time has since become part of our verbal history. But the sequence of events in Darwin that day certainly did not reflect the military honour that the War Cabinet wished us to believe.

On the contrary, for what really happened was a combination of chaos, panic, and, in many cases, cowardice on an unprecedented scale. Has become well known as a concise reference to the Battle of Darwin 1942. Published by Methuen Books.  Many photo plates.