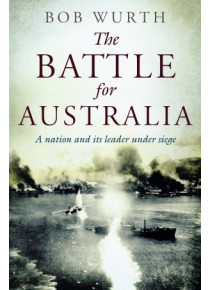 The Battle for Australia by B.Wurth : new book

Australian Author, Bob Wurth further investigates the 1942 Battle of Australia with an enlarged study including the Leader of the Australian Nation, John Curtin. John Curtin﻿ was a new PM when Australia was thrust into its 'darkest hour'fighting the Japanese. ﻿By early 1942, the Japanese Army and Navy﻿ had laid waste to all the fortesses to our north. The Battle of Australia was underway with the Darwin air attacks sounding the alarm bells through the corridors of Canberra. Apart from the Battles, Wurth looks at the impact of PM Curtin's failing health. It would be a long hard Battle fought in the countries to our north Malaya, Singapore, what is now Indonesia, Borneo, Timor and Ambon, and New Guinea.﻿
A large exhaustive study by the author following on from his previous book, 1942: Australia's Greatest Peril. ﻿