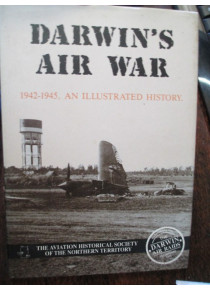 Aviation Historical Society of the Northern Territory Winnellie 1991 Publication﻿. Even though titled as an illustrated history has a large detailed text within book.

Major Operational Squadrons of RAAF, the 49 Fighter Group USAAF, No 1 Fighter Wing RAAF and the heavy bombers. ﻿ Bombing Raids on the NT﻿﻿, Airfields, the aircraft (Spitfires Kittyhawk Hudsons and Beaufighters)﻿ used in Darwin defence and NT.﻿