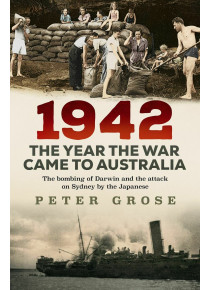 1942 The Year the War Came to Australia by Peter Grose

This is a combination book of the best-selling An Awkward Truth and A Very Rude Awakening.
The bombing of Darwin by the Japanese on 19 February 1942 was the first wartime assault on Australian soil. The Japanese dropped more bombs on Darwin, killed more civilians in Darwin and sank more ships in Darwin than Pearl Harbor. The story A Very Rude Awakening, continues three months later, when on the 31 May 1942, three Japanese midget submarines crept into Sydney Harbour and caused an unforgettable night of mayhem, high farce, chaos and courage. The war was no longer confined to distant deserts and jungles. It had well and truly come to Australia.