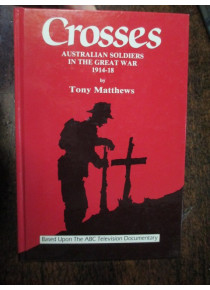 Crosses - Australian Soldiers in the Great War 1914- 1918' by Tony Matthews. During the winter of 1984 Matthews was writing the A.B.C. television documentary of the same name.

During interviews one 95 year old digger told him his main regret, "My main regret is that after I'm gone all my memories go with me; Imean,I can see them like a colour film in my mind;...fighting the Turks, but after I'm dead.. we are the last, and it is a shame it will be lost forever!"

Matthews set about collecting as many stories as he could and we thank him for his efforts. As Matthews comments in his Foreword '...the old diggers, who ranged in age from 87 to 96, were sadly , but literally, dying around me'
These are the stories Matthews collected.