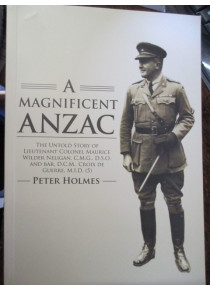 History of a 9th and 10th Battalion CO

Maurice Wilder Neligan was born in 1882 in England. Due to a ‘checked’ life, he enlisted in the Royal Horse Artillery in 1910. He only served with the Artillery unit for 12 months before leaving and travelling to Sydney. His life in Australia was somewhat of a mystery, caused in part by him using aliases and a fictitious birthplace, address etc.  Just prior to the commencement of the Great War he was employed as a clerk in the Pioneer sugar mill at Proserpine, Queensland.
Within days of Australia declaring war on the 5th August 1914, he enlisted as a Private being allotted number 974 in the 9th Battalion. He was a capable soldier, with a ‘flair for raiding’ and was quickly promoted sergeant on 1st January 1915.

He was a first day lander with the 9th Battalion at ANZAC and was awarded the DCM for gallantry. Due to Officer casualties within the battalion he was soon acting as adjutant of the 9th Bn. He was commissioned as 2nd Lieutenant on the 28 April 1915 - the first of many Officer promotions. On the night of 27 May 1915 he led a successful raid on a Turkish post called ‘Twin Trenches’near Gaba Tepe.

After being wounded he was evacuated to Egypt. But due to this man’s determination, he discharged himself from hospital and made his own way back to Gallipoli.

His first major action on the Western Front, was on the night of the 1st July 1916 he and his men undertook a raid on German trenches at Fleurbaix. Charles Bean said of the raid that it was, ‘Probably the most brilliantly executed of the series of raids’. Neligan who had been seriously wounded continued to command until all his men had returned.

In his trench raids, he used the knobkerrie to great effect – his knobkerrie was half a entrenching tool with an iron cog wheel attached to its end. Due to this raid’s success he was awarded the DSO Distinguished Service Order. After returning to the Battalion he was temporary acting CO of the 9th Battalion after the departure of Lt. Col. Robertson.

He was present at the 2nd Battle of Bullecourt in May 1917 and then the 3rd Battle of Ypres. On the 15th July 1917, he was promoted to the Commanding Officer of the South Australian ﻿10th Battalion. The 10th Battalion, then fought outstandingly at the Battle of Polygon Wood.

However, his greatest battlefield achievement was deemed to be the capture of Merris in July 1918. Although when asked Neligan said, 'Crepey Wood and Lihons was the best show the 10th Battalion ever did, and further that this was his greatest.'

﻿This Australian Military Book would be of immense interest to researchers of the 9th or 10th Battalion AIF. The various Battles are excellently detailed and supported with both maps and illustrations. The author, Peter Holmes who worked at the AWM during the 1980's has undertaken an outstanding amount of research to unlock the hidden secrets behind one of Australia's finest Commanders of WW1 .....